Up In Smoke BBQ is run by the BBQ PitMaster Junior Urias! A cool, down-to-earth guy who’s been cooking since he was 12 with a passion for putting smiles on people’s faces through food! Junior loves cooking! He loves creating foods that people love! 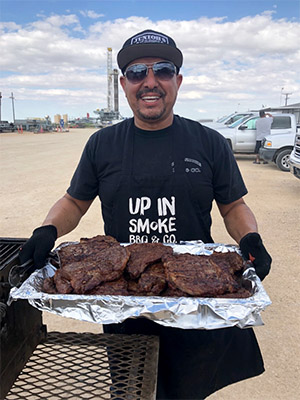 Up In Smoke BBQ is a family-owned & operated restaurant & catering business. Been in business for 15+ years! Features delicious Texas BBQ – fan favorites include brisket, ribs, beans, & hatch mac & cheese! Pork belly is making its way up the ranks!

Junior got his start in Midland! Really made a name for himself there & gained lots of fans & followers when he competed in the popular show BBQ PitMasters. Junior competed in 2 seasons & was actually crowned the title of Texas PitMaster! Hope you get to watch his episodes! As of now, the Midland location has closed as we make our move to Brownwood TX! We hope you follow us on social media to watch our journey & to keep up with updates on opening up there!